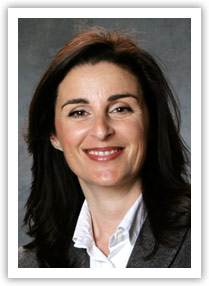 Chef Rima Barkett grew up in Tuscany, Italy. In her mother’s kitchen she learned the love of feeding people and sharing her amazing talent for cooking delicious, simple meals that easily brings people together.
Rima brought those traditions with her to the United States in 1993 when she moved here after marrying California businessman Anthony Barkett. She realized the American dream when she opened her own restaurant in Stockton, California, in 2002. “Café Luna Spaghetteria” quickly became the hip place in town. In 2006, she moved with her husband and daughter to Rome to spend a few years working on the World Summit of Nobel Peace Laureates. She continues to be active in global peace initiatives through her foundation Ambassadors of Peace.

Rima has cooked for VIPs – hosting dinners at her home in Italy for actors and activists like George Clooney, Don Cheadle, Jimmy Wayne, Peace Nobel Laureates – and for VNP, very normal people like family and friends, and underprivileged children. She has been featured in the Los Angeles Times and in the Stockton Record (www.recordnet.com), Elegant Lifestyle, San Joaquin Magazine, Lodi Sentinel and has made television appearances as a guest chef on ABC, NBC and CBS affiliates.

She perfected her cooking skills at culinary schools Cordon Bleu in Florence and Gambero Rosso in Rome. Her world travels give her a special perspective on food and families sharing meals. She speaks five languages fluently, having studied modern language at the University of Pisa and the University of Damascus.

Rima’s love of cooking and her mother’s inspiration has been a main ingredient in the passions she has chosen in her life, including her advocacy for children and for those less fortunate.

Rima has been awarded: